Caregiving in the United States Today 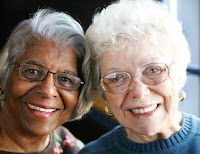 A new report from the National Alliance for Caregiving and AARP reveals the demographics and characteristics of adults providing care for other adults over 50 in the United States. This report, Caregiving in the U.S.: A Focused Look at Those Caring for Someone Age 50 or Older, examines the changes in caregivers and care recipients since 2004.

The need for caregiving is only going to grow as the US population continues to age. In the next 25 years, the number of Americans over age 65 is expected to double. In 2012, little more than two years away, half of the labor force is expected to be a caregiver.

We need to take steps now to ensure that caregivers have the support they need in the workplace. Legislation such as the Healthy Families Act, which gives workers the opportunity to earn up to seven days of paid leave per year to care for themselves or their family, can mean the difference to caregivers who struggle to keep their jobs and provide the services their recipient needs. The CLASS Act, meanwhile, would give workers the opportunity to begin setting aside money now that could be used in retirement to pay for long-term care in the home. It is currently part of the healthcare reform package.

Please take action on these important bills, and continue reading to learn more from the new report on caregiving. A few other findings: