Earned Sick Days: How About THEM Apples? Philadelphia City Council Greeted this morning with Baskets of Hand-written Letters, Apple-O-Grams and Storybooks in Support of Earned Sick Days

Earned Sick Days: How About THEM Apples?
Philadelphia City Council Greeted this morning with Baskets of Hand-written Letters, Apple-O-Grams and Storybooks in Support of Earned Sick Days


"We should not be forced into a position where we get behind on rent or bills because we're being good moms." - Linda Montgomery 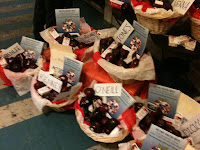 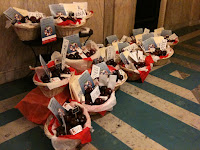 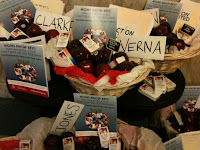 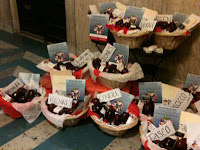 “Two out of five Philadelphia employees are not allowed by their employers to earn sick days,” said MomsRising Executive Director Kristin Rowe-Finkbeiner. “When a worker has to choose between going to work sick and losing a day’s pay to stay home sick or with sick kids, it compromises families’ economic security and the public’s health. We hope the Philadelphia City Council won’t be a bad apple – Philadelphia workers need this bill!”


MomsRising.org is an online and on-the-ground grassroots organization that supports family-friendly policies. MomsRising, with the help of WOMENS WAY, PathWays PA and the Campaign for Working Families created “Apple-o-grams” – apples with messages from local MomsRising members to Council urging Members to support a bill that would guarantee workers the ability to accrue earned sick days. Accompanying the apples was a booklet with personal messages from local families and stories about the need for paid sick days.

MomsRising is a member of the Philadelphia Earned Sick Days Campaign a project of the over 80 member Philadelphia Coalition for Healthy Families and Workplaces. The coalition wants Council to pass the Promoting Healthy Families and Workplaces Act (Bill 080474). The bill was voted out of the Public Health and Human Services Committee on March 1, 2011. As amended, the bill allows Philadelphia workers the opportunity to earn up to 7 days of sick time per year. The bill could affect up to 200,000 workers in Philadelphia who do not have access to paid sick days.

“All Philadelphians should be guaranteed the right to take time off from work when they are sick or when a family member is sick,” said Councilman Bill Greenlee a co-sponsor of the bill. “Often the decision is whether to get paid or stay home and risk losing ones job. It is those left with this tough decision who need our help the most. I look forward to this important piece of legislation becoming law in Philadelphia.”

Coalition member, Action United (AU), is a membership organization of 48,000 low and moderate income Pennsylvanians working to build power through organizing communities to win changes on the issues like good public schools, living wage jobs, and quality, affordable health care. AU has been going door-to-door across the City talking to residents about the earned sick days bill. Action United has been going door-to-door getting letters from Philadelphians who want to see this bill passed.

Elizabeth Lasiter, a RN who lives in Strawberry Mansion and canvasses with Action United, said, "The response we are getting at the doors of working class Philadelphians is extraordinary. People need this common sense legislation. Heads nod up and down when we tell folks that there's a bill pending in City Council that, if passed, will give working families the earned sick days they deserve."

Mariko Franz, a working mother who came to City Hall to help deliver apples, story books and letters to members of City Council, said, "I am here to show my support for the Promoting Healthy Families and Workplaces Act. As a working mother, paid sick days have become that much more important - not only for the economic stability of my family, but for our mental and emotional wellness as well."

"It's an incredible strain on a family such as mine where neither myself nor my husband have paid sick days," continued Franz. " We agonize over who can more afford to take a day off work when we need to stay home to care for our daughter. I know there are vast number of families out there for whom missing one day of work can risk their job or financially ruin them. As families continues to struggle during this prolonged economic recession, the Promoting Healthy Families and Workplaces Act is a small step towards alleviating the burden that many of these families face."

Linda Montgomery lives in South Philadelphia and made sure she could join Action United, MomsRising and the Coalition.

"I'm being paid to care for others while no one else cares for me," said Linda Montgomery. "I'm in support of the earned sick days bill because it is unbelievable that anyone should not have this basic benefit. There have been times in my life when I did not have paid sick days, and as a mother it made it difficult for me to financially support my family. Children get sick. As mothers, we need to take care of our children. We should not be forced into a position where we get behind on rent or bills because we're being good moms."
Posted by MB at 12:16 PM