The Mayor's Statement on Sick Days 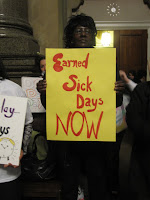 On Tuesday, Mayor Nutter released a statement giving his reasons for vetoing Bill 080474, Promoting Healthy Families and Workplaces, which would have allowed all Philadelphians to earn sick days in their jobs.  However, the Mayor's statement does not take all of the recent research and information into account.