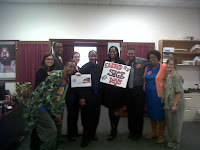 With this bill, Philadelphia becomes the first city in the country to make paid sick days part of their living wage ordinance

Philadelphia, PA - When a loved one becomes ill, are you forced to choose between caring for them or losing a paycheck, or even your job?  People without paid sick days at their jobs often face these impossible choices -- between the work they need and the families they love. Today, Philadelphia's City Council took a step towards giving Philadelphia workers a new choice: the opportunity to earn sick days.

Full-time workers at companies who contract with the city or who receive city subsidies will now be eligible to earn up to seven paid sick days each year under a bill introduced by Councilman W. Wilson Goode, Jr., and passed by City Council today. Bill 110557, an ordinance ensuring that all employers who fall under the 21st Century Minimum Wage and Benefits Standard must provide sick days to their full time workers, passed with a vote of 15-2. It now awaits the Mayor's signature.

"The health and livelihoods of all Philadelphians are compromised when working people are forced to go to their jobs when they're sick," said Marianne Bellesorte, Senior Director of Policy at PathWays PA. "City Council took an important step today by ensuring that city tax dollars only fund jobs that support public health, families, and the community."

Studies in other cities show that both businesses and employees benefit from earned sick days policies. Businesses save money from higher productivity and lower turnover, and workers use paid sick leave responsibly and often do not use all of the time offered to them. A study of San Francisco's paid sick days law shows many business concerns about job loss were unfounded, with six in seven employers saying that paid sick days have had no negative effect on profitability and two-thirds of employers surveyed supporting the law.

"Earned sick days are good for business and good for working families," said Rebecca Foley, Director of Public Policy at WOMEN'S WAY. "This bill is the next step to making sure that all Philadelphians have access to paid sick days."

In June 2011, City Council passed a bill that would give all Philadelphia workers an opportunity to earn paid sick days at work. Mayor Nutter vetoed that bill at the Chamber of Commerce. A similar bill will be introduced next year.

"National momentum for paid sick days continues to grow as elected leaders in yet another city voted today to help working people squeezed by the economy. Philadelphia joins Connecticut and Seattle in voting this year to enact this common sense reform that will boost public health and strengthen families and the economy both.

"The Philadelphia law is a simple change that will have a major positive impact on the lives of thousands of families. Paid sick days will support economic recovery by helping people keep their jobs. Paid sick days are good for workers and their families, good for businesses and, with flu season approaching, good for the public health. We look forward to continued progress in Philadelphia this January when the new City Council will take up comprehensive paid sick days legislation that covers more workers.

"With Denver residents voting now for a paid sick days ballot initiative and with diverse grassroots coalitions backing active legislation in New York City, Massachusetts and many other places, this is a movement that continues to grow."