PSD for City Contractors and Subsidy Recipients is Law in Philadelphia! 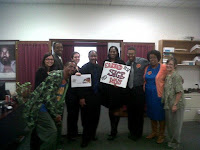 Great news! The paid sick days amendment to Philadelphia's 21st Century Minimum Wage and Benefits Ordinance, which passed 15-2 on October 13, became law today.  This bill, which will go into effect on July 1, 2011, will ensure that covered employers shall provide to each full-time, non-temporary, non-seasonal covered employee at least the number of earned sick leave days that the employer would have been required to provide to such employees if the provisions of Bill No. 080474-AA, as passed by Council on June 16, 2011, had been enacted into law rather than vetoed by the Mayor.

The employers described below are considered "covered employers":

The Coalition for Healthy Families and Workplaces would like to thank Councilman Goode, who was the main sponsor of the bill, as well as to the other 8 cosponsors and the members who voted for this bill on October 13.
Posted by MB at 1:59 PM