Philadelphia's labor leaders have sent a message to City Council members asking them to override the Mayor's veto of earned sick days. The cover letter is below (it went to all members who voted against the bill, not just Councilman Squilla) and the text of the message is copied as well. 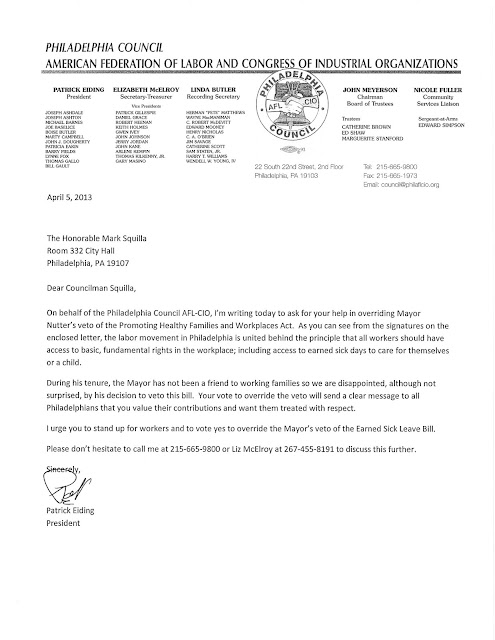 Philadelphia’s families are counting on you to stand up for their jobs, their health and their economic security by signing the 2013 Promoting Healthy Families and Workplaces Bill. Nearly 200,000 Philadelphians are unable to earn any paid sick time, which means they are forced to work sick or stay home and risk losing critical income or their job. And we urge you to side with families instead of corporate lobbyists by voting to override Mayor Nutter’s shortsighted veto of the earned sick days bill.

Earned sick days are a core issue of economic security for working families in our city. For an average family without sick days, losing 3.5 days of wages is the equivalent to losing an entire month of groceries. Beyond the loss of income, almost a quarter of workers in the US say they have been fired or threatened with job loss for missing work due to illness or caring for a sick loved one.

Getting the flu shouldn’t get you fired, and the money flooding from corporate lobbyists shouldn’t drown out the voices of hundreds of thousands of Philadelphia’s workers and voters who strongly support and desperately need earned sick days.

New census data shows that Philadelphia leads the nation in “deep poverty” among big cities. We need to rebuild an economy that works for everyone. Post--‐recession, most of the jobs being created are low--‐ wage and part time jobs with few, if any, family protections. We need to make sure that the jobs created in Philadelphia are jobs that can support a family and that working people can cover the basics. Earned sick days is a modest policy that will strengthen financial security for families, and boost the economy by making sure they have money in their pockets to spend at local businesses.

Over the past two years the earned sick days bill has adopted 23 amendments through collaboration with the business community that provide special provisions for mom--‐and--‐pop shops and promote the flexibility that small businesses need to thrive, while still protecting the jobs of hardworking Philadelphians. Enabling working people to earn paid sick days will have immediate public health benefits, preventing the needless spread of illness through workplaces and schools by enabling workers to recover and parents to care for sick children at home without fear of retaliation. Beyond the public health benefits, studies show that earned sick days will save Philadelphia’s employers half a million dollars a year, and save the city $10.3 million a year in health care costs by reducing preventable emergency room visits.

Most of the hardworking men and women that we represent already earn paid sick days as part of their negotiated contracts. But we believe that everyone deserves to be able to care for their health or that of a loved one, without the risk of losing wages or being terminated. It’s in everyone’s interest to make sure that earned sick days are a basic workplace standard for all Philadelphians.

Philadelphia should join with other cities and states that have taken the step to rebuilding an economy that works for everyone by making earned sick days a basic workplace right. We urge you to put the interests of families first and we are counting on your leadership to make earned sick days a reality for Philadelphia.