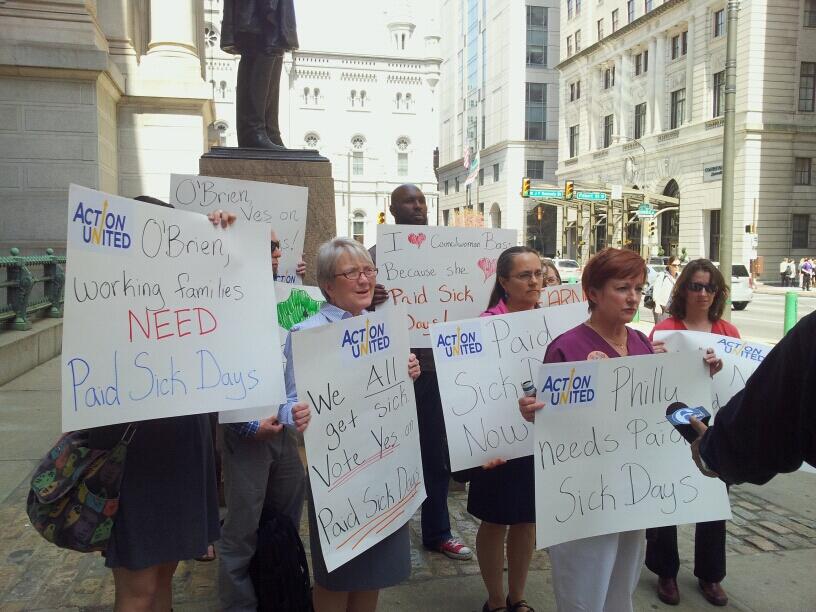 Pressure Mounting on City Council to Side with Families, Override Mayoral Veto of Sick Days

PHILADELPHIA—As nurses and childcare professionals rallied at City Hall to urge City Council to side with Philadelphia families and override Mayor Nutter’s veto of the Earned Sick Days bill, a new poll was released today showing overwhelming support for the measure among Philadelphia voters.

The earned sick days bill would protect nearly 200,000 Philadelphians who are currently unable to earn paid sick days, preventing them from taking time off when they or their families are ill. The bill passed Philadelphia City Council 11-6, but was vetoed by Mayor Nutter. Supporters are pressing for Council to override that veto on Thursday.

The new survey of 590 Philadelphia voters from Public Policy Polling shows a strong 77 percent of Philadelphia voters supporting a law requiring businesses to allow earned sick time. In addition, 68 percent support an override of the mayor’s veto, and a plurality of voters say that a council member’s failure to override the veto would make them less likely to vote for that council member.

“This polling tells us what we already knew to be true, that Philadelphians support, want and need earned sick days,” said Marianne Bellesorte, senior director of policy at Pathways PA and a leader of The Coalition for Healthy Families and Workplaces, which supports the bill. “We urge the City Council to listen to their constituents, not to corporate lobbyists, and side with families by overriding the Mayor’s veto on earned sick days.”

Nurses and caregivers today told council how especially crucial earned sick days are for working parents, who without paid sick days can face the terrible dilemma of choosing between caring for a sick child or earning the money needed to pay for that child’s needs.

“Being able to earn paid sick days is a basic protection for working families,” said Patricia Eakin, PASNAP President and an Emergency Room Nurse at Temple University Hospital. “Parents should be able to take a few hours off work to take their kids to a doctor during the day; otherwise a child’s sickness could worsen and result in a trip to the ER. A job should be what enables you to care for and support your family, not what prevents you from caring for them.”

Research shows that families without access to sick days are also the ones least able to afford unpaid time off. The issue is compounded for working parents who are often forced to send sick children to school because they cannot afford to take care of sick children at home. Studies have shown that parents with earned sick days are 20 percent less likely to send a sick child to school and that when parents care for sick children at home, they get better sooner and reduce the risk spreading the illness to their classmates. A new study from the Institute for Women’s Policy Research (IWPR) shows that sick days would save Philadelphia an estimated $10.3 million a year in healthcare costs by reducing preventable emergency room visits.

Lawmakers and business leaders around the country are supporting earned sick time as a policy that strengthens the economy by keeping people in their jobs. This March, Portland, OR became the fourth city to adopt paid sick days, and New York City is poised to become the 5th US city, and the largest city yet, to pass a paid sick days law. Statewide bills are moving forward in Vermont and Massachusetts. Residents of Orange County, FL, should be able to vote for sick days in August 2014 thanks to 50,000 voters who petitioned for the ballot initiative.

These recent wins and active campaigns build on past victories in Connecticut, which passed the first statewide law in 2011, Seattle in 2011, Washington DC in 2008, San Francisco in 2006, and a November 2012 ballot initiative in Long Beach, California granting sick days to hotel workers. At the federal level, Rep. Rosa DeLauro and Sen. Tom Harkin introduced the Healthy Families Act this month, which would set a national sick days standard.